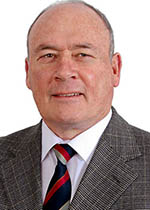 Peter was born in Salisbury, Rhodesia, where he completed his schooling at Ellis Robbins High and this was followed by his army service in the Rhodesian army.  Peter married Colleen, his wife of 48 years.

After studying engineering at UCT in Cape Town, Peter then completed his B.Com through Unisa and thereafter completed a diploma in Investment Analysis and Portfolio Management.

Peter and Colleen have 2 sons, both of whom have emigrated. One to New Zealand and the other to the UK.

Peter has extensive business experience, inter alia having founded Eagle Ink Systems in 1992 which grew to 4 national outlets. The business is largely a manufacturing business producing printing inks for the packaging industry.

The business was eventually sold in 2005 to their technology partners Flint Group.

After a short sabbatical Peter had bought and eventually sold a small franchise business. Subsequently after a short involvement in the property market, a natural affinity for business resulted in him joining Affiliated Business Brokers in 2015. He enjoys assisting buyers and sellers of businesses to achieve their goals.